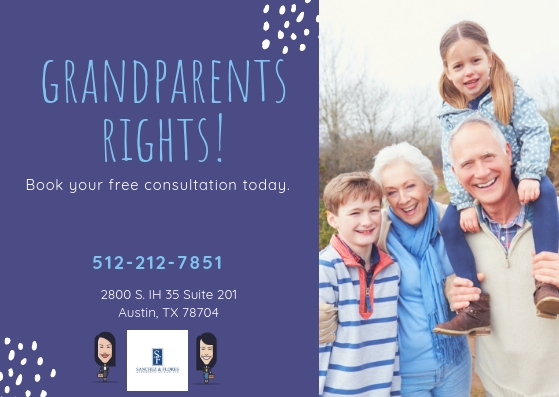 My grandpa was a stubborn man with little patience and no filter. He taught me how to be resilient. About 5 years before my grandpa passed away, he had both of his legs amputated. He was determined to get prosthetic legs and walk again. He would wake up every morning, swing his stubs out to the side of the bed and put on each prosthetic leg. If he saw someone being a couch potato, he would yell out, “What a waste of a pair of legs!” After many falls, he was able to walk again and gained his independence. He inspired others, especially me, to never give up. It’s a lesson I have carried into adulthood.

Grandparents can play an important role in the lives of their grandchildren, if given the chance. Unfortunately, grandparents can lose this opportunity with their grandkids when their child goes through a divorce and that parent has limited time with their child or when a grandparent’s relationship with their own child becomes estranged. You will find yourself in a situation where you have to negotiate visits with one or both of your grandchild’s parents.

Normally, it is presumed parents alone have the right to make decisions on behalf of their children, including who gets to visit the children. It is not an easy task to prove that their grandchild will be significantly impaired without a grandparent’s consistent access to their life. Grandparents should showcase the nature of their relationship with their grandchildren and how involved they have been in the past. Moreover, grandparents must show that the parents are unfit to determine what’s in their grandchild’s best interest or that the grandchildren will be unsafe in the parent’s sole care due to abuse or neglect, mental illness, or drug abuse.

If their grandchild gets adopted by someone who is not a stepparent or if their son or daughter gets their parental rights terminated, then grandparents will be denied custody and visitation. At that point, a grandparent’s connection to their grandchild will be legally cut off by the court.

Every situation is unique. You should seek the advice of a Texas family attorney to determine your options in keeping your grandchildren in your life. Call today for a free consultation 512-212-7851.

Wize is one of the world's lead- ing management consulting firms. We have offices in 25 countries. All our clients share our passion for results and it shows in their success.

Wize has extensive experience across all industries. We bring each client a combination of deep industry knowledge and expert perspectives.

Sign up to receive useful information, tips, tricks, and updates.